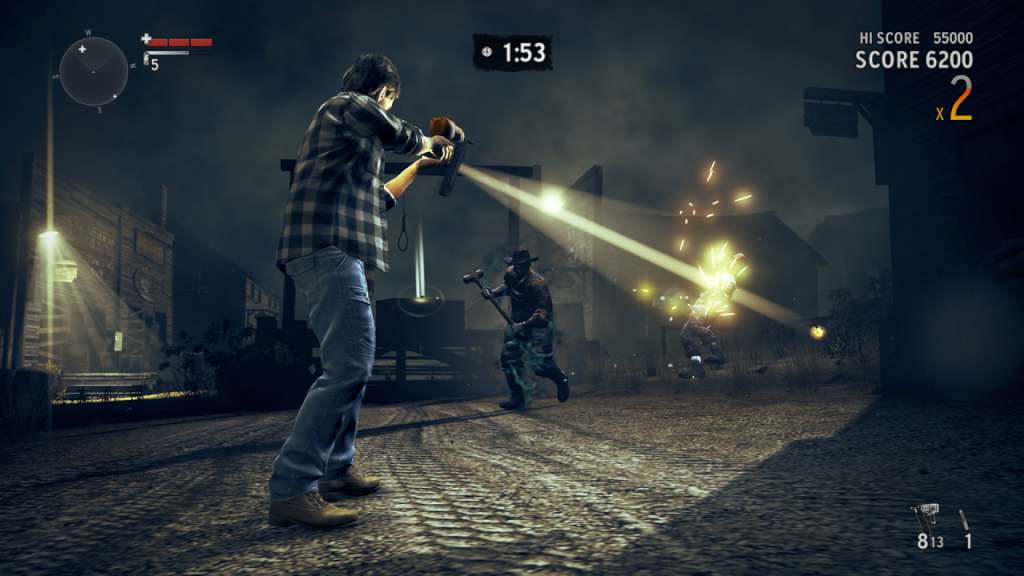 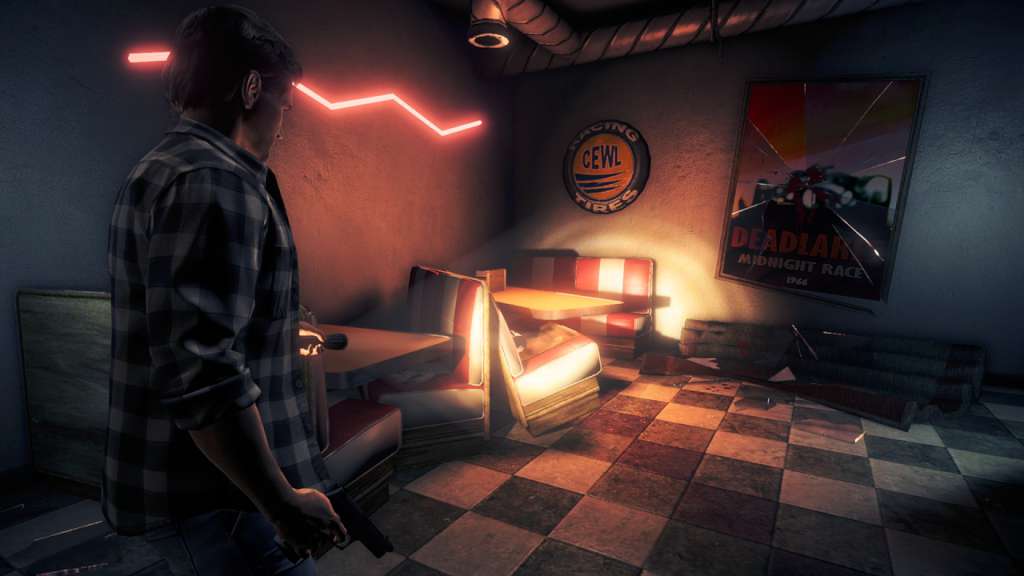 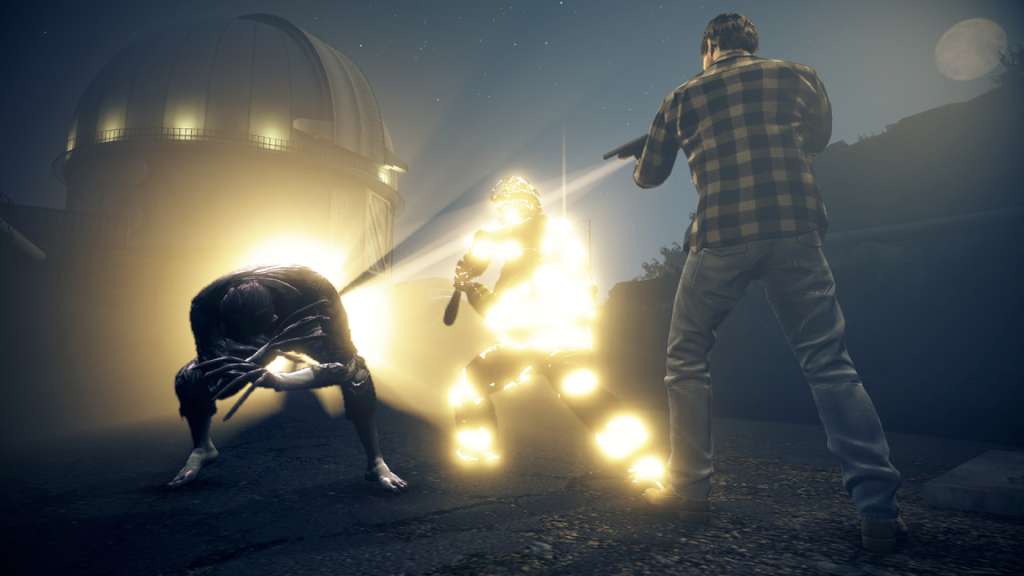 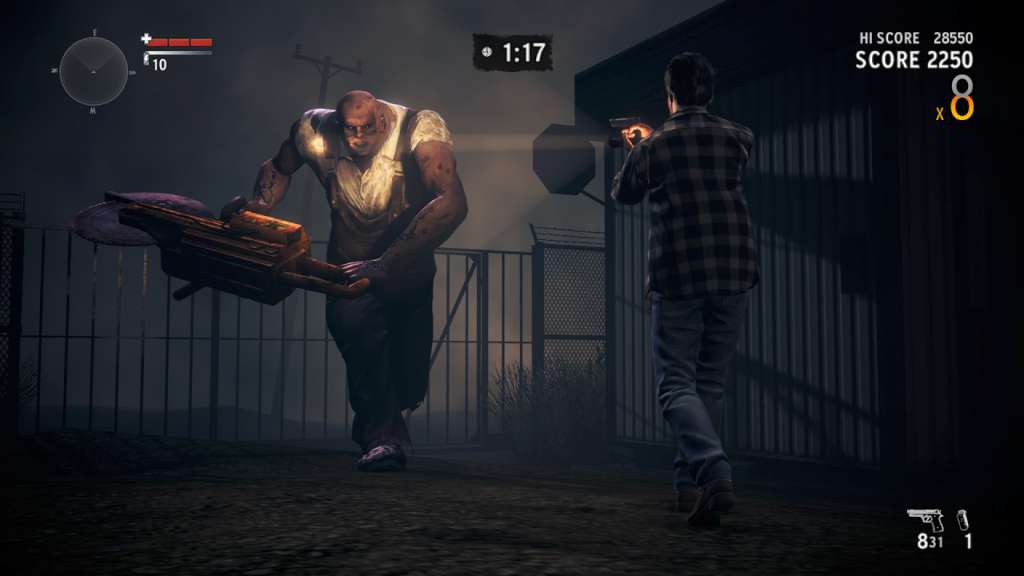 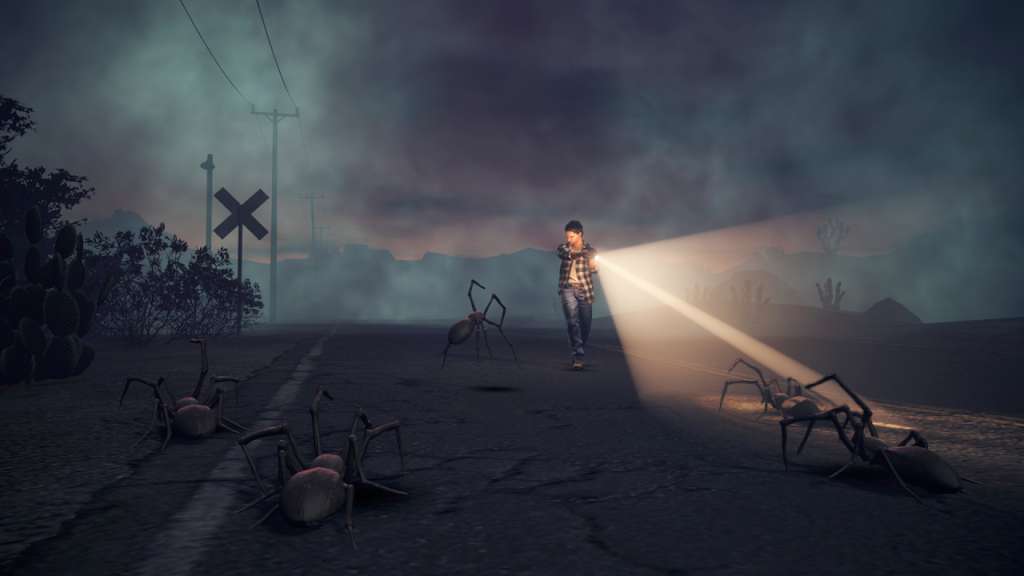 The plot of American Nightmare is framed by the narration of an episode of the fictional TV show, "Night Springs," which follows the style of The Twilight Zone and appeared on television screens throughout the original Alan Wake. Alan Wake's friend and manager, Barry, is asleep in a motel room. The narration explains that Alan is attempting to chase down the "herald of darkness", Mr. Scratch, who is Alan's evil doppelganger created by a dark force. Scratch is determined to take away everything Alan loves, including his wife, Alice. Alan, as the "champion of light," has the ability to rewrite reality, and was able to write his escape from Cauldron Lake in Washington. He ends up near the small town of Night Springs, Arizona, and learns that he has been missing from the real world for nearly two years. A nearby oil derrick erupts with several foes controlled by Mr. Scratch. Seeking light, Alan runs to a nearby motel, where he encounters Emma Sloan, who at first thinks he is Mr. Scratch, since they look identical. She tells Alan that Scratch was at the motel the night before, and provides Alan with a typewritten page, a way to alter reality to destroy the derrick and stop the foes. Alan follows its instructions, which causes a meteor to collide with an artificial satellite, sending it hurtling towards the ground, where it then collides with the oil derrick. While Alan is away performing this task, the dark forces consume Emma. Following clues he found at the motel, along with a set of keys, Alan heads to a nearby observatory. There, Dr. Rachel Meadows, who also met Mr. Scratch previously, is tracking a mysterious signal sent just before the satellite was knocked out of orbit. Rachel tells Alan that Mr. Scratch was very interested in this signal, and Alan surmises that it must contain the key to fighting the darkness. While attempting to obtain the complete signal, the observatory's telescope is sabotaged by the darkness, which reinforces Alan's belief that the signal contains something he needs. After repairing the damage, a portion of the signal comes through that translates into a page of a story: a new reality that Alan can presumably implement. The page points him to a nearby drive-in theater, where he meets Serena Valdivia, who is under the influence of the darkness. After freeing her by restoring power and switching the lights on, Serena tells Alan that Mr. Scratch is trying to prevent the sun from ever rising again. She gives Alan the security code to the projection room where he can change reality. Alan uses the incomplete message to try to set the new reality. However, as the message is only partial, the new reality does not take effect. Mr. Scratch appears, gloating, and sends Alan back in time to a few hours before. Waking up again near the motel, Alan repeats many of the same motions. Emma and Rachel still have some deja vu of the previous loop's events, and have helped perform some of Alan's previous tasks for him. Despite his efforts to change events this time around, Emma is nevertheless consumed again by the darkness. Rachel is able to capture a longer portion of the signal this time, but it is still incomplete. When Alan returns to the drive-in theater, he is again unable to complete the new reality and is sent back in time again by Mr. Scratch. Alan repeats his actions for a third time, but this time, he is able to save Emma and gain the complete message from Rachel. He sets the correct series of events in the projection room, which triggers the projector to show a film made by Alice. Mr. Scratch appears again, but discovers that Alan has successfully written the new reality, and he is burned out of existence by the film. On the screen, Alan appears to reunite with Alice along a sun-lit shoreline; however, the narrator notes that this could quite possibly be just a figment of Alan's imagination, since he is still trapped in the Dark Place. During the credits, it is revealed that the name of the episode of Night Springs that Alan wrote himself into was titled "Return", a reference to the manuscript he began to type at the end of Special Two: The Writer. After completion of the game's credits, Barry wakes up suddenly, believing he has heard Alan's voice.

"Please remember that we are NOT responsible for any problems that may arise from purchasing and using Steam Gifts. You are doing it at your own risk.
"Please note, that due to recent Valve Steam Gift policy update Steam Gifts for games that are covered by VAC ban program can no longer be added to Inventory. Make sure that you are logged in to the proper account before entering the link as Steam Gifts can be only added to your library or rejected.

How do I use a Steam gift given to me?

If you do not already have Steam, download and install Steam here. Once you have Steam installed, you will be prompted to create an account or login to an existing Steam account. If you do not have an account, please create one.
You will receive an e-mail containing a link that will open Steam allowing you to redeem your gift. After clicking the link, you will receive a notification at the top right corner in the Steam client informing that you have a new gift.